★★ The Latest Posts on The Poetry Daily Critique

New to the Cabinet: Vampires and Eroticism

Just added to the cabinet, an essay once presented at a conference, one of my favorites: "The Emergence of the Occult from within the Culture of the Occult, or, When a Vampire is Just Trying to Get Laid."

It's an exploration of three Hammer horror films from the 70s: Lust for a Vampire, The Vampire Lovers, and Twins of Evil, primarily via de Sade and Bataille. It is definitely a meeting of cinema and theory, but a fun one. (Very well received at the conference.)

My playground today is the Karnstein trilogy, the trio of vampire movies produced by Hammer studios in '70 and '71: The Vampire Lovers, Lust for a Vampire, and Twins of Evil. They are all based to one degree or another on Le Fanu's novella "Carmilla," though they can not at all be said to be in any sequence, or even of the same narrative world. They are famous among the Hammer films as being at the vanguard of the studio's move into nudity and more explicit sexuality, the first two films marked especially for their lesbian content, the third for featuring as the title characters Playboy's first twin playmates. In fact, sexuality dominates the thematics of the three films to the point of their being far more about desire than horror: not solely within the narrative proper, but also in the film as engaged by the viewer. Yet much of the body of that thematics – both visual and ideational – would hardly fall under the heading of the erudite. Segments of the films are easily described as soft-core porn; and it is not surprising how many reviews of the films – irrespective of their overall opinions on quality â€” will speak of an "immature approach" to the sexuality, or "scenes that exist only for the titillation of the male audience,"[FN1] or even "adolescent masturbatory fantasy."[FN2] One online reviewer renamed the second film Lust for Knockers.[FN3] All fairly, and all with ample reason: for example, Vampire Lovers includes a scene of a towel clad and topless Ingrid Pitt chasing a half-undressed, soon-to-be victim around a bed in girlish, slumber party giddiness; and Lust for a Vampire features a running shot tracking through the rooms of a finishing school while the young women attendees are dressing for bed.

Something I Read #4 — de Man, "Lyric and Modernity"

A follow-up on the previous post: the closing lines from the next essay in the de Man's Blindness and Insight, "Lyric and Modernity":

Something I Read #3 — de Man, "Literary History and Literary Modernity"

Was doing a bit of random, off-the-shelf reading and came across this moment. These are the closing sentences to Paul de Man's essay "Literary History and Literary Modernity," found in Blindness and Insight. It makes an interesting counterpoint to some historiographic essays by Arnaldo Momigliano being read (and quipped) by an FB friend, essays which (at least to my viewing) approach history from the opposing side, out of the idea of history as constituted of discoverable truths.

Review: The Vorrh by B. Catling

This is something from the reviews in the Cabinet, also an Amazon review, which repost here because this book deserves all the word of mouth that can be had. 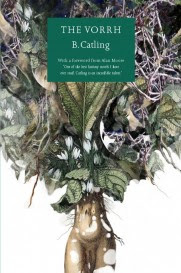 In his forward to The Vorrh, Alan Moore (author of Watchmen and V for Vendetta) writes the following:

"By definition, surely every fantasy should be unique and individual, the product of a single vision and a single mind, with all of that mind's idiosyncracies informing every atom of the narrative. A genre that has been reduced by lazy stylization to a narrow lexicon of signifiers . . . wizards, warriors, dwarves and dragons . . . is a genre with no room for Bunyan's Pilgrim's Progress, arguably the earliest picaresque questing fantasy, for David Lindsey's Voyage to Arcturus with its constantly morphing vistas and transmogrifying characters, for Mervin Peake's extraordinary Ghormanghast books or for Michael Moorcock's cut-silk Gloriana. It is certainly a genre insufficient to contain the vegetable eternities of Catling's Vorrh."

The key word there is "insufficient." It is a word of attack and accusation against the admirers of fantasy.

It is a common complaint of the patrons of the genre that fantasy gets little respect within literary circles. It is works like The Vorrh that speak why such recognition is not offered because it is mostly undeserved. For The Vorrh stands head and shoulders — even navel and knees — above the common fare of fantasy. It reveals in its literary writing and its symbolic imagination just how banal, repetitive, poorly written, and indubitably un-literary most of the fantasy scene actually is, and how indefensible most fantasy works actually are. Indeed, this book, just as with Alan Moore's words, is itself attack and accusation against the admirers of fantasy. For this is a book that fantasy enthusiasts should be holding up at con panels to popular writers with an accusation of "why are you not writing works like this?" It is a book that they should be thrusting before the publishers and bookstores saying "We want more of this."

Email ThisBlogThis!Share to TwitterShare to FacebookShare to Pinterest
Labels: catling b., fantasy, reviews

Something I Read #2 — Coleridge, Lectures on Shakespeare

This is found in Coleridge on Shakespeare:The Text of the Lectures of 1811-12, edited by R.A. Foakes (1971; pg. 41). It is from the diary of John Payne Collier, who shorthand notes are the only original source for Coleridge's lectures. This moment in the diary is from his description of an evening where Coleridge was one of the guests of his father. The diary date is Monday, 21 October 1811, four years before he writes the Biographia Literaria.

Two ideas stand to the front. First, how it describes the unity of morality and poetry (and the third, philosophy), grounded not upon a priori or Christian historicism or dogma, but upon the foundation of the individual psyche in direct experience with the cosmos.

Second, how much the language describes the Jungian archetype that underlies the divine, the psychical ground for understanding that direct experience with the cosmos.

A Reading of Philip Larkin's "An Arundel Tomb"

Something new to the Cabinet, a reworked post from the Jot.

The poem can be found here.

I am only a casual reader of Larkin, which is to say I have never done any academic work on him. (Though, my first introduction was in the classroom.) At this point I only possessed the first edition of the Thwaite Collected, which did not organize the poems by the books published (something I think always an error in a collected). The second edition is in the post, however, and I look forward to being able to read The Whitsun Weddings and High Windows as they were meant to be read.

For me, while Larkin gives an air of the conversational in his poetry – a quip on the back cover reads "Larkin is our most accomplished and memorable poet of the common places of experience" – it is false to think Larkin was a kind of English version of James Wright. Larkin's poetry usually carries a density, a subtlety, an intellectuality that Wright's work rarely achieves. Larkin's poetry is controlled poetry (in the very positive sense of the word). Unlike much New Formalist poetry I see, he never (ok. never say never, so, rarely) uses a word for the sake of the rhyme or rhythm alone. (Which is the usual case for competent UK poets writing in verse, something to which the New Formalists haven't seem to caught on yet). I do not think it is for nothing that he sometimes reads to me like a UK Wallace Stevens. Both would chose the archaic word that works both aurally and ideationally over the more common or contemporary word that does not work as well ideationally. Which, personally, is rather a requisite of writing poetry: all of English language (all of language) is always in play, with the only deciding fact being the right word/phrase/line/stanza for the work as a whole.

This blog is the sister blog to
Poetry Daily Critique
It is a place where I can write on subjects outside the domain the PDC in subject, scope, or size. As well, it will serve as a posting board for updates to the Cabinet (see below). It will usually receive less attention than the PDC; and really has yet to find its wind.

A collecting spot for writings and playthings, notes and queries, for explorations and creations, for seriousness and silliness. This blog will be used in part to announce new additions to the site.